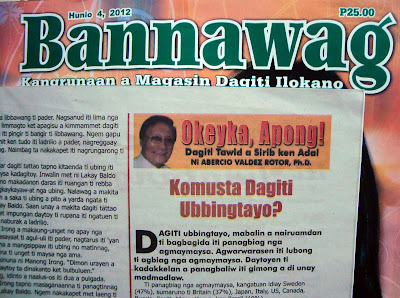 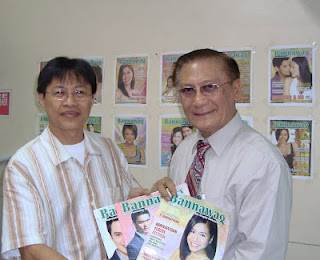 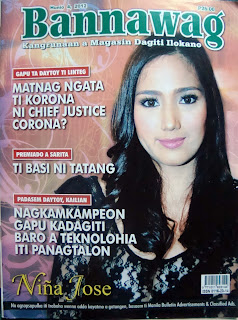 Read Bannawag, it is the Ilocano magazine with the largest circulation, in the    Philippines and in Ilocano communities abroad - from Hawaii, Middle East on to Europe.

Read Bannawag, and learn a language learned at birth, by affinity and association, a beautiful language - both exotic and ethnic, rich, musical, expressive, a language Ilocanos carry with pride to the corners of the earth.

Read Bannawag, it is the flagship and conservator of Ilocano culture, the GI (Genuine Ilocano) imprimatur, trademark of beautiful traits and values - the Ilocano tool of  survival and dominance, at home and away from home.
Read Bannawag, it is a trail blazer of the migratory and transient characteristic of the Ilocano, of his homely nature, and his homing instinct, returning to his native region in the true sense of a balikbayan.

Read Bannawag, it has the uniqueness of the super-superlative, like beauty begetting beauty ad infinitum, so to speak. (napintas, napinpintas, kapintasan - and kapipintasan) - the last word means "most, most beautiful", a rare language phenomenon.

Read Bannawag, its tonality is akin to the natural environment - tone of tenderness or firmness, tone that pierces distance or keeps closeness sacred, echoing tone over fields and rolling hills, prayerful, romantic, dirgefull.

Read Bannawag, and learn by intonation the speaker's origin, the naturalness of his  accent, clear syllabication, distinct "R" and nasal contraption (likened to German) -  variations indigenous to a place or extent of influence by other languages.
Read Bannawag and enjoy the myths and legends from Lam-ang the epic hero, to Angalo the legendary giant, the biblical Lakay-lakay whirlpool, and many folk tales Ilocano counterpart of the Arabian Nights and the Grimm brothers stories.

Read Bannawag, and live in the era of the Zarzuela (homegrown drama)  and Moro-moro (stage play, musical comedy of Christians fighting the Moors in medieval times) , enjoy the unique musical qualities of Bannatiran (kingfisher), O, Naranniag a Bulan (Moonlight serenade), Pamulinawen (a love song) and Ayat ti Maysa nga Ubbing (Love of a Lass and an Old Man), among many compositions, original and adapted. 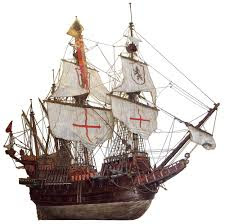 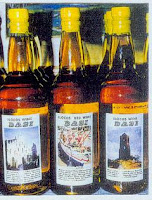 Read Bannawag, and savor the spirit of a unique wine - Basi, once exported to Europe via Mexico through the Galleon Trade during the Spanish era , envy of the colonial masters who attempted to monopolize the wine industry resulting in the infamous Basi Revolt of 1807 and death of scores of Filipinos who defended their livelihood, pride and honor.

Read Bannawag, in an armchair travelogue of history and arts, of scenic beauty, rich biodiversity, home of living tradition, a piece of Eden created by the edges of the Cordillera range and the South China Sea meeting on a narrow strip of land like a hollow - kuloong, from which the word Iloco is derived .

Read Bannawag, and meet the great Ilocanos who led the country to greatness from Diego and Gabriela Silang (first Filipino revolutionists), Ramon Magsaysay (most loved people's president) to Ferdinand Marcos (strongman who pushed the country into the 21st century); poetess Leona Florentino, heroes Antonio and Juan Luna, and Fr Jose Burgos whose ancestral home in Vigan is now a  museum; met many other great Ilocanos, old and contemporary. 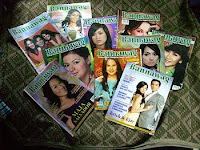 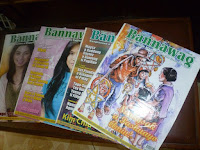 Read Bannawag, and it will take you back to the homeland of the simple sturdy and frugal, industrious and persistent, where brain and brawn are welded in a sturdy body, determined mind, and throbbing heart of joy and fulfillment. ~
iceberg sketch  *Lesson on former Paaralang Bayan sa Himpapawid with Ms Melly C Tenorio 738 DZRB AM, 8 to 9 evening class Mon to Fri 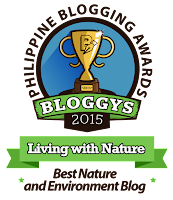